Mark English studio pilgrimage with the Illustration Academy in 2017

We’ve lost a legend with the recent passing of illustrator and artist Mark English. In the summer of 2017, I spent a week at the Illustration Academy in Kansas City.  Getting instruction and inspiration from illustrators John English, George Pratt, Bill Carman and Bill Sienkiewicz, and Mark English, was a life changing experience. When I got back I made a blog post about the whole week. Here is an excerpt of the original post on the transformative visit to Mark English’s studio.

The visit to Mark English’s home studio was magical. When entering his studio we were encouraged to move things around and look behind paintings, in stacks and flat files. It reduces seasoned illustrators to kids in a candy shop. 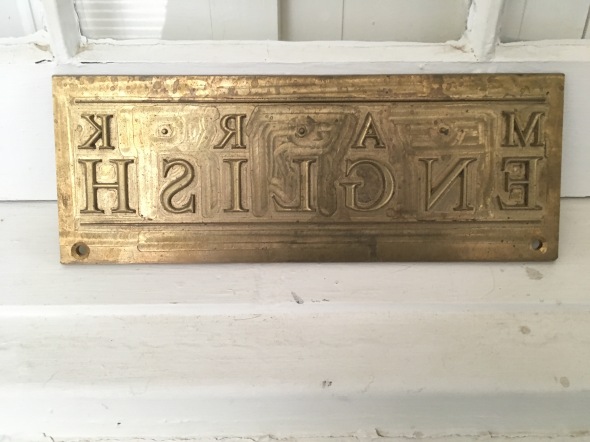 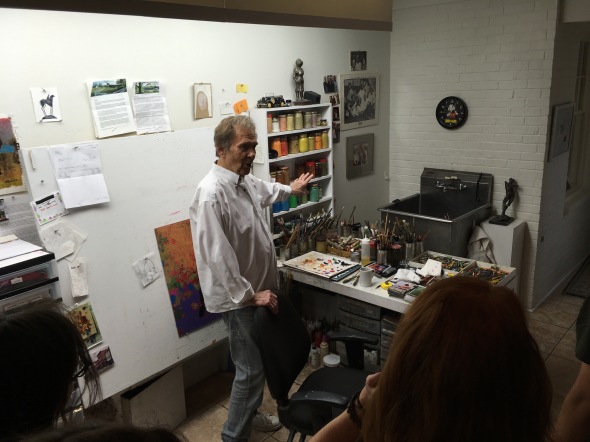 Mark English: The master artist in his element. 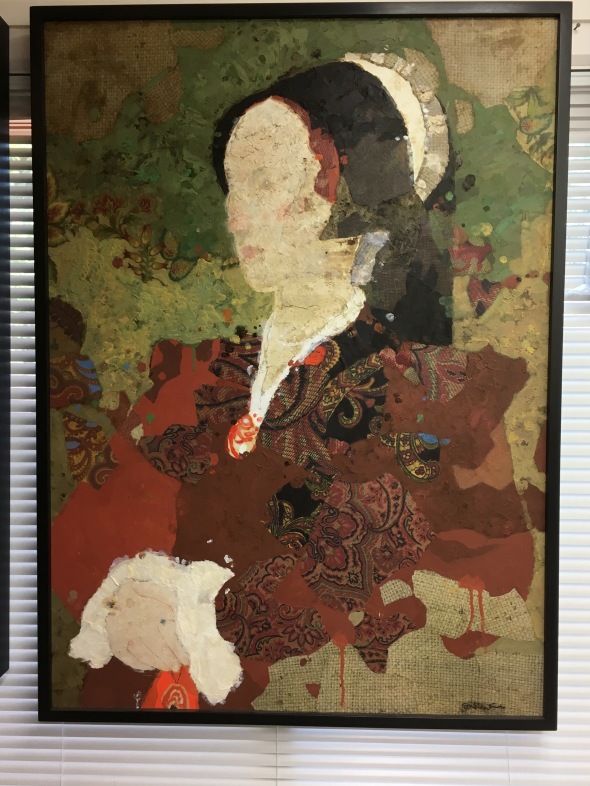 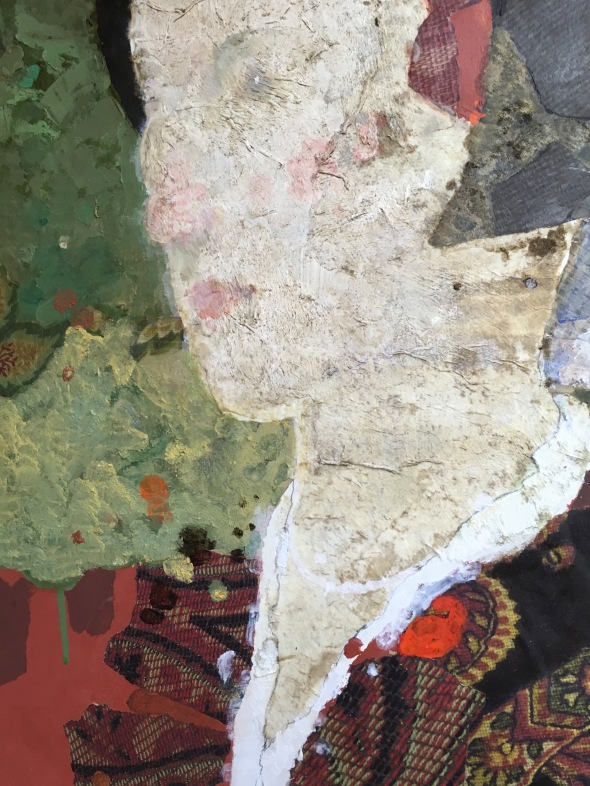 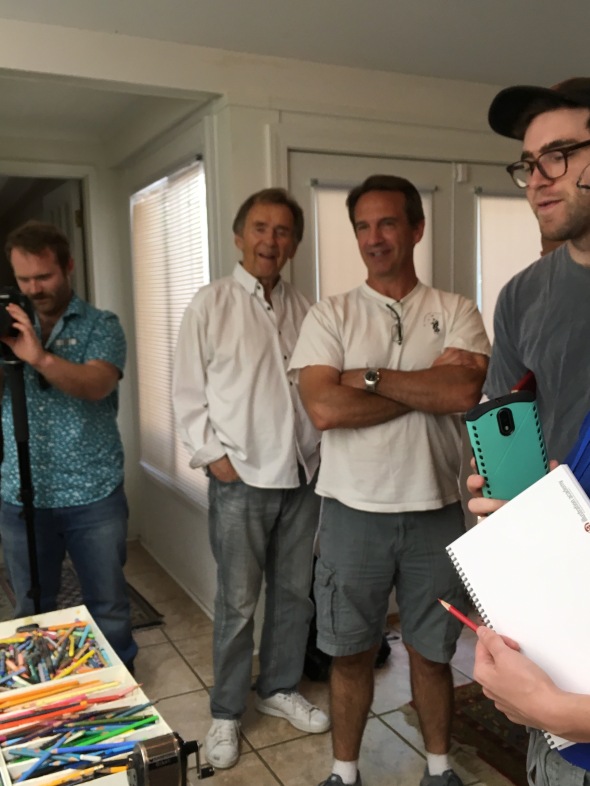 Mark and John English (above), 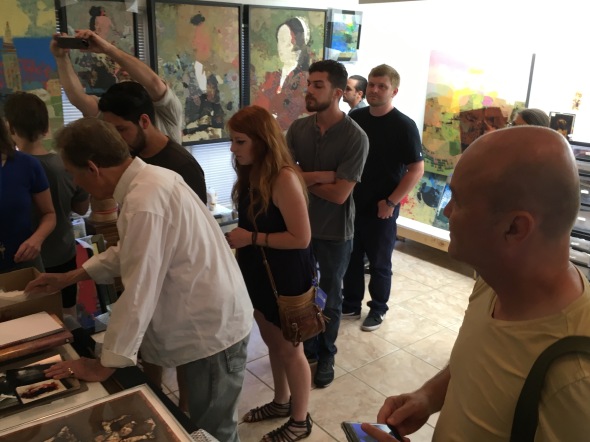 Mark encourages students to dig through his artwork as Bill Carman watches.

George Pratt, Bill Carman (with back to camera), Mark English and Bill Sienkiewicz. 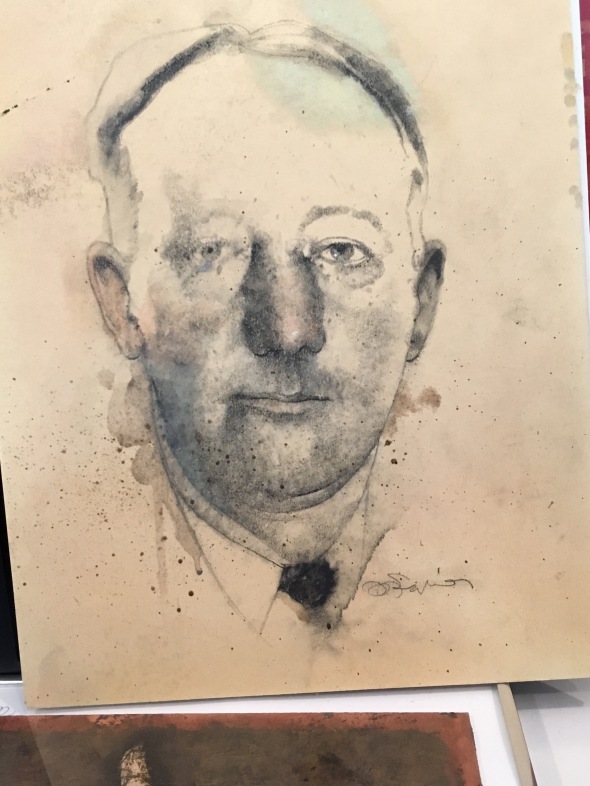 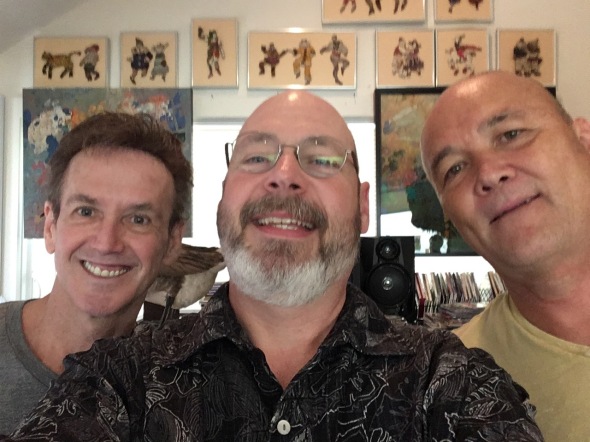 Yes, that is a Bison head and displays with Society of Illustrators medals.

This is one of my favorite paintings from the visit to the Mark English studio.

The best part was getting to talk with Mark and tell him about how inspired I was from seeing him do a demonstration at the Academy of Art in San Francisco in 1997 or 1998. I spied a box of books and asked him if they were for sale, so I bought one and asked him to sign it. Timmy Trabon took the above picture of Mark English and I in his studio with a work in progress in the background. 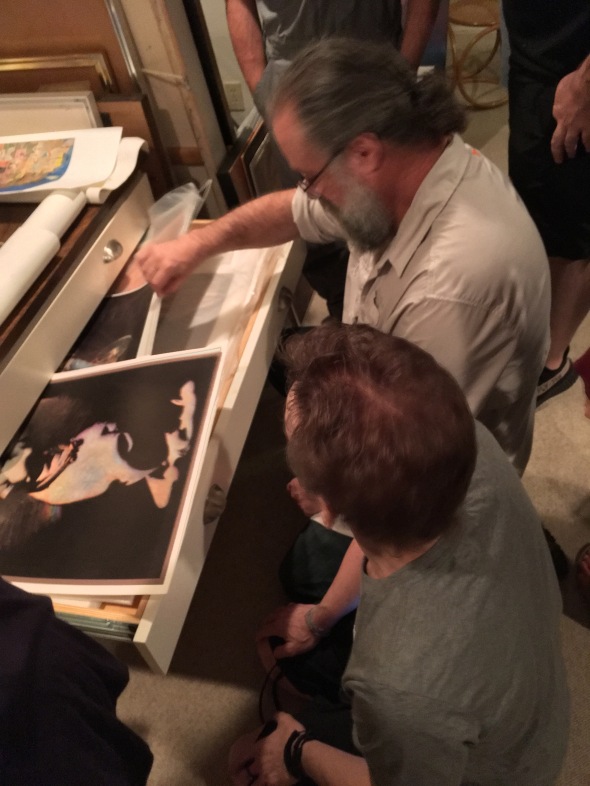 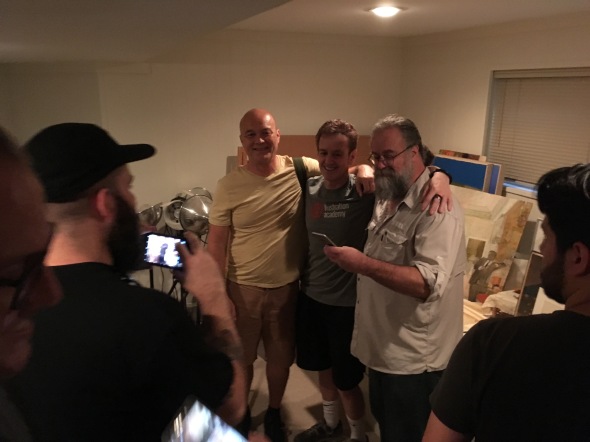 Two Bills, a George and a Bernie Fuchs 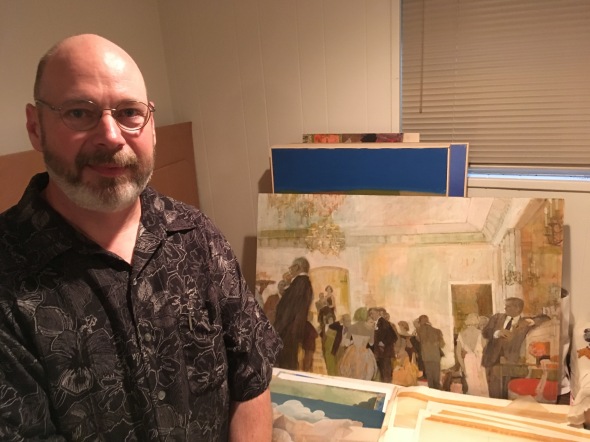 Chuck Todd and a Bernie Fuchs magazine illustration. (George Pratt: ” Hey man, you want a picture with the Fuchs?”  Me: Yes, Please!”)

Teddy Roosevelt and the Rough Riders drawing by Mark English 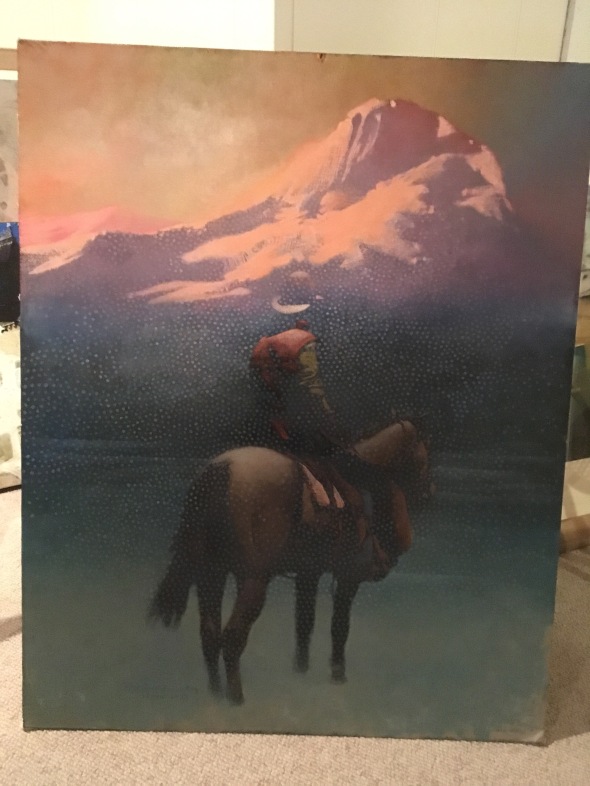 Mark’s dogs were part of the experience as well.

Found this John Collier gem hiding under some artwork.

Detail from the Fuchs illustration

Detail from the Fuchs illustration

Transfer drawing monotype using linseed oil. I think George said this one was for Sports Illustrated. 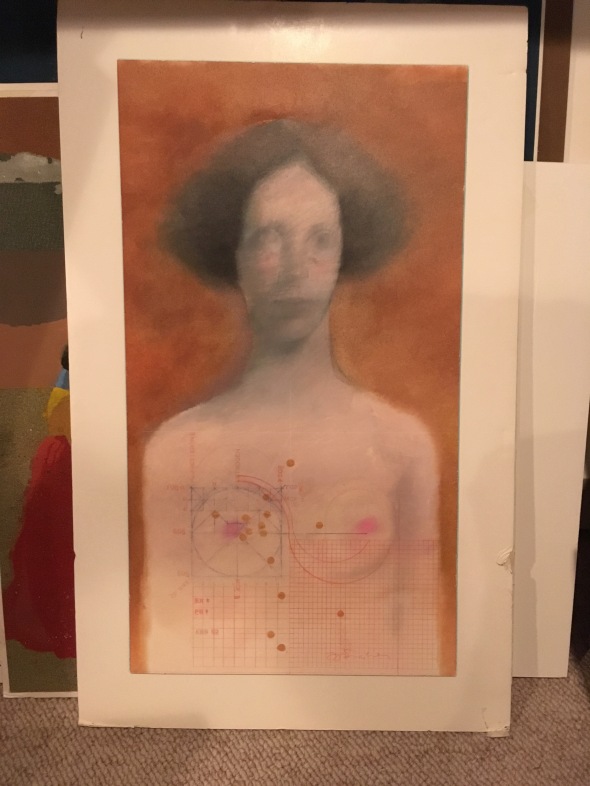 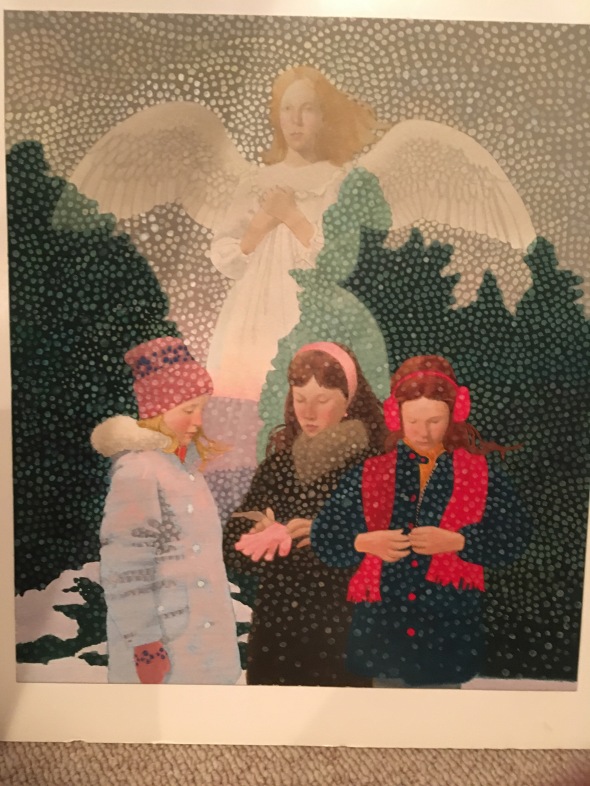 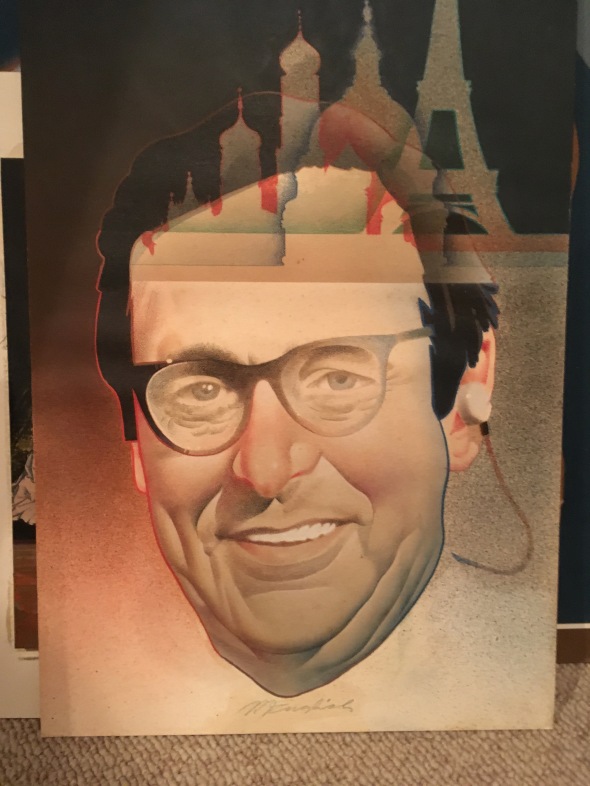 We went out to lunch. I sat down at a small table and John English invited me to sit at their table, and I sat next to Mark. We had more conversations about where he shows in galleries, etc. And listened to him tell some great, hilarious stories. I had ordered a pizza and beer. I was sweating it, because for a dollar more I got the 22-ounce porter (instead of the polite 16-once size). I worried that Mark English is going to think I’m a lush! When it was delivered to the table, Mark asked me what it was. I said it was a crane brewery porter. I asked him if he would like to try it. So he took a sip of my beer. “That is a heavy beer.” And he returned to drinking his bottle water. So I can proudly say that Mark English sipped my beer!

August 13, 2019 note: The impact and legacy of Mark English from his decades of influential illustration, to his fine art paintings to his teaching and mentoring is immeasurable. My heartfelt condolences to his family, friends and the scores of artists inspired by the example he set for us.

For the full post on my week at the Illustration Academy go here.